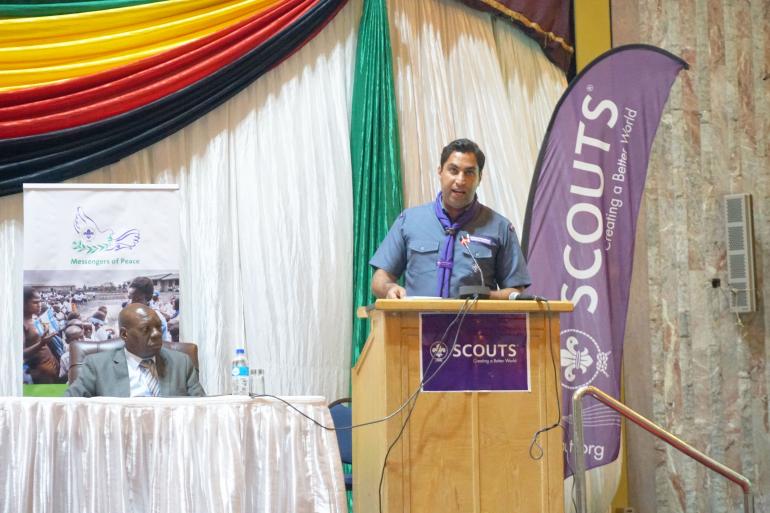 After the official opening of the 17th Africa Scout Conference by H.E. President Mnagangwa represented by Minister, Hon. Kadzembe Kadzembe different activities of the conference picked up as member organizations continuously received updates on the different activities that had been going on throughout the triennium and inputs from the world level.

The Chairperson of the World Scout Committee, Mr. Craig Turpie emphasized the movement’s Growth agenda as being one of the top most goals of the committee on behalf of the World Scout Conference. “By 2020 we should be standing at 75 million Scouts in the world if we are to be on track with our Vision 2023 and all of you need to take an active role in contributing to this,” he said

In his report he also shared that the World Scout Committee had an induction meeting in Nyeri, Kenya where they looked at all the resolutions that came out of the 41st World Scout Conference and developed an operational framework to get this work done. Three main work streams were developed as a result of this. “I sincerely thank the over 100 skilled volunteers from around the world have taken up different positions within the operational framework in order to support the Committee in achieving its objectives,” he added.

The Secretary General of World Scouting, Mr. Ahmad Alhendawi in his speech too congratulated the NSO’s for working hard in continuously look for partners to help grow and support Scouting. He highlighted a few of the partnerships that had already been established at the world level and encouraged the NSO’s to take advantage of them to benefit Scouting at local levels.

He continued to share about the creation of the One World Scout Bureau and the collaboration established between the different staff in the different regions through thematic teams that are working to better the services being delivered to NSOs. “We have a new service model to streamline our services to you. The model already contains 12 services that you can take advantage of already, but we will keep updating it with more services as we develop them. Please utilize the platform and give us feedback on what you feel. This should be your one stop shopping place for the scout services that you need,” said Mr. Alhendawi.

The Chairperson of the WSC and the Secretary General had a brief question and answer to interact more with the different NSO’s and get feedback on their different reports.

The different World Scout Bureau staff and volunteers from the world and regional level also collaborated in delivering sessions on the new WOSM Service Model. This was done in 2 parts - a plenary session followed a 13 station market place where participants were taken through the services and given an opportunity to register their first requests.